I have held original sermon notes in my hands. I "broke" into the Metropolitan Tabernacle in London with another pastor. I am a few volumes away from a complete set of 63. I have Passmore and Alabster copies of the Sword and Trowel. I have read countless biographies. I thought I knew all things Spurgeon, So imagine my surprise when I found out that "lost sermons" had been discovered. I couldn't pre-order fast enough. After what seemed like an eternity, I finally opened the box and beheld this beautiful first volume: The Lost Sermons of C. H. Spurgeon Volume I: His Earliest Outlines and Sermons Between 1851 and 1854. These are the earliest sermons (or should I say expanded outlines - Spurgeon was an extemporaneous preacher) by the boy preacher before he became world renowned as the "Prince of Preachers." Even in these stumbling first words you could see the genius that was to come. Covering about 76 sermon shells, you can see the passion and spiritual depth that was to be. Each one has a photograph of the original outline, coupled with explanatory notes and other historical content. Many of these could be taken by a preacher today and turned into powerful exposition. I absolutely love this volume and look forward to the others in the series. if you are a fan of Spurgeon or just great preaching this is a much purchase!

Posted by Scott Nichols at 9:13 PM No comments: 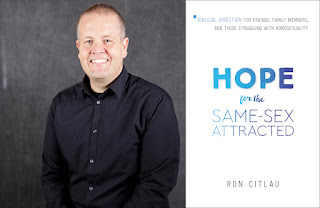 Ron Citlau is a fellow pastor in the Reformed Church in America. And when it comes to addressing the biblical hope offered same-sex attracted individuals, he knows what he is talking about. Ron spent many years lost in the wilderness of same-sex attraction until God in his mercy called him, not only out of that lifestyle, but into marriage, family and full-time ministry. In his prior book, Compassion Without Compromise, Ron tells his story and lays out a biblical case for recognizing that same-sex attraction is not God's good plan for his people.

In his newest book, Hope for the Same-Sex Attracted, Ron turns to the Bible once again to offer biblical direction to same-sex strugglers and those who would love and minster to them. Weaving Scripture, story and practical steps together, Ron shows those with same-sex attraction that there is a better way. The book is divided into two main parts. the first deals with the obstacles that stand in the way of same-sex strugglers from being open to the healing and transforming power of Christ. he address the issue of Gay Christian Identity, Gay Marriage and the Spiritual Friendship Movement. he explains the attraction of these "solutions" to many people, but then shows that ultimately they come up short in addressing the deepest needs of the individual. This section is also helpful to Christians who are struggling themselves with how to integrate the Same-Sex Attracted (SSA) into the community.

The second section focuses on the Gifts that are available to the SSA in their pursuit of transformation. Ron first, addresses the Gifts of the Church, Healing Communities and Christian therapy as keys to beginning and continuing the work of spiritual transformation. He reminds church leaders that they play a key role in creating an environment where change can take place .The next three gifts, Ron addresses touch on the important relational needs of the SSA. Looking in turns at Singleness, Marriage and Prayerful Lament, he honestly wrestles with the ways that the SSA can accept God's calling to living out their relational lives. The section on Prayerful Lament is especially powerful as it deals with facing some of the losses that come from following God's plan for the future.

Ron ends with two very practical chapters. One addressed to Church Leaders and another for the Same-Sex Attracted. He challenges the church to vulnerable and loving as it seeks to minister to those with SSA. The practical lessons in this chapter are invaluable. The closing chapter is a heartfelt plea from one whose had wandered in the wilderness and by God's grace and power found his way home to others wanderers to follow the path that Scripture has lain out.

Hope for the Same-Sex Attracted is just that - a word of hope. With so much focus in the Church today upon the nature of the sin, Ron's book is a powerful correction and remainder that the Gospel is about transformation, not condemnation. Ron has written a book that will be helpful going forward both for the same-sex struggler and the church called to welcome them in truth and love. I highly recommend it.
Posted by Scott Nichols at 9:53 AM No comments:

The first message in our new series "Misinformation" questions at whether or not it is true that God will never give you more than you can handle. If God does give us more than we can handle on our own, what should we be doing with the burdens of life?

MP3 File
Posted by Scott Nichols at 11:55 AM No comments:

The Pearl of Greatest Price is not what you think. This sermon on the famiilar parable corrects our misunderstandings and points us more fully to God's love for us. Preached August 28, at the Faith Reforemd Church in Midland Park, NJ.

MP3 File
Posted by Scott Nichols at 11:24 AM No comments:

This message, part of our VBS kickoff, examines the Parable of the Hidden Treasure in Matthew 13:44. The treasure is not what most people think and when we realize what it really is - it can radically change how we see God, ourselves and our mission.

MP3 File
Posted by Scott Nichols at 11:24 AM No comments: 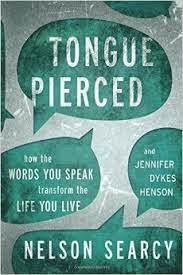 "In our words are the power of life and death." With this premise, Nelson Searcy, begins a helpful look at the way we communicate with God, ourselves and with others. Rooted in the Words of Scripture, Searcy offers very practical ways to improve the way we use our words to create a deeper spiritual life, better relationships and a positive sense of self. After laying a biblical foundation on the power of our words to be a creative force, for good or bad, he shows us how to use those words to connect with God in prayer, love those closest to us and learn to confront in ways that grow relationships rather than harm them. I especially appreciated his treatment of curse words and his challenge to clean up our conversation by committing to 30 days of watching our tongues. A timely book with a timeless message I highly recommend picking up a copy of Tongue Pierced.

Posted by Scott Nichols at 9:42 AM No comments:

Review: "What Does the Bible Really Teach about Homosexuality?" 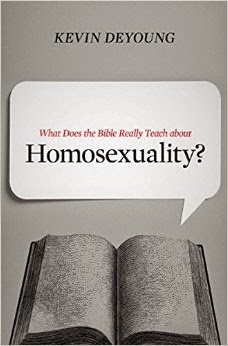 Homosexuality has been on the front-burner of the clash between the church and culture for some time now, but it is threatening to boil over as the church now fights on two fronts - without and within the church. In "What Does the Bible Really Teach about Homosexuality?" Kevin DeYoung has written a balanced and passionate defense of the biblical doctrine of sex and marriage. Beginning with careful exegesis of the relevant passages, he shows that the Bible is not ambiguous about its call to sexual purity and the fact that marriage is between a man and a women. In doing so he addresses some of the recent scholarship within the evangelical community that questions is that what God really said about the issue. He rightly calls out those who would have experience trump the clear teaching of Scripture. In the second half of the book, DeYoung turns his attention to some of the common objections made to the matter. Both pastoral and forthright, he answers the questions without resorting to some of the tired tropes that have sadly marked the Evangelical response thus far to the issue of homosexuality. This section will be a resource to be returned to time and again. The three appendixes address the issue of same sex marriage and same sex attraction with a call to the church to make ten commitments in is interaction with those wrestling with the issue of both. I want to conclude my review with I think the best quote in the whole book: "The God we worship is indeed a God of love. Which does not, according to any verse in the Bible, make sexual sin acceptable. But it does, by the witness of a thousand verses all over the Bible, make every one of our sexual sins changeable, redeemable, and wondrously forgivable." I highly recommend this excellent resource.

Posted by Scott Nichols at 9:42 AM No comments:

Listen to the angel's song, all you who have a troubled heart. "I bring you good tidings of great joy!" Never let the thought cross your mind that Christ is angry with you! He did not come to condemn you. If you want to define Christ rightly, then pay heed to how the angel defines Him, namely, "A great joy!"

Posted by Scott Nichols at 9:57 AM No comments: